The Sacrament of the Anointing of the Sick

Is this sacrament the same thing as Extreme Unction or Last Rites?

Yes and no. The Anointing of the Sick has also gone by the name Extreme Unction which, as a name, emphasizes the anointing (unction) and the notion that this sacrament is for those who are dying. However, there are many other circumstances of illness and disease in which this sacrament should be received. It should not be neglected as only for the moments immediately prior to death. The Last Rites involve the administration of Anointing of the Sick as well as Confession (if possible), Viaticum (final Holy Communion) and the prayers of commendation.

Why is it necessary for a priest (or bishop) to administer this sacrament?

Because forgiveness of sins is among the effects of the Anointing of the Sick it is necessary that a priest (or bishop) administer the sacrament. Deacons and laity can pray for the sick and dying, but not to the same effect as this sacrament.

How does one get a priest to offer this sacrament?

Every parish has a phone number to use to contact the priest in case of emergency. Simply call the parish phone number and follow any directions to let the priest know of your need. If you should have to leave a message it is very helpful to include information including a way to contact you, the name of the sick person, the location, and the state of health (kind of illness, possible closeness of death, ability to speak, etc.).

Q & A from the Compendium

Who can receive the sacrament of the anointing of the sick? (316)

Compendium of the Catechism, #316

Who administers this sacrament? (317)

"This sacrament can be administered only by priests (bishops or presbyters)."

Compendium of the Catechism, #317

How is this sacrament celebrated? (318)

"The celebration of this sacrament consists essentially in an anointing with oil which may be blessed by the bishop. The anointing is on the forehead and on the hands of the sick person (in the Roman rite) or also on other parts of the body (in the other rites) accompanied by the prayer of the priest who asks for the special grace of this sacrament."

Compendium of the Catechism, #316

What are the effects of this sacrament? (319)

This sacrament confers a special grace which unites the sick person more intimately to the Passion of Christ for his good and for the good of all the Church. It gives comfort, peace, courage, and even the forgiveness of sins if the sick person is not able to make a confession. Sometimes, if it is the will of God, this sacrament even brings about the restoration of physical health. In any case this Anointing prepares the sick person for the journey to the Father’s House.

Viaticum is the Holy Eucharist received by those who are about to leave this earthly life and are preparing for the journey to eternal life. Communion in the body and blood of Christ who died and rose from the dead, received at the moment of passing from this world to the Father, is the seed of eternal life and the power of the resurrection.

When we are sick or dying we must face the fact of our mortality. In this time of difficulty Jesus does not abandon us.

He gave us priests who bring us the graces of the sacrament of the sick, called Anointing of the Sick because the principle sign is anointing with oil consecrated by the bishop.  Sometimes this sacrament is mistakenly called the Last Rites though it is only one part of the complete Last Rites of the Church which also include Confession (if the person is able to speak), Holy Communion (called viaticum), and special prayers for the dying.

Anointing of the Sick is for Catholics who are sick or facing life threatening situations (like major surgery or a serious medical emergency), as well as those who may be facing immanent death.  Because of the notion that calling the priest for this sacrament may mean giving up on a dying loved one, many Catholics wait until too late to call the priest.  Doing this risks leaving the dying person without the important graces of this sacrament.

The principle grace is a strengthening of the virtue of hope to help the sick person not to despair and to strengthen them against any fear of death.  It also helps them to endure whatever suffering is caused by their illness or injuries and unites them to the suffering Christ who draws close to them and provides spiritual comfort.  For those who are not able to make an oral confession of their sins it also provides forgiveness of sins.  This is a great gift because it allows the ordinary grace of sacramental forgiveness to be given even in this extreme circumstance.  Sometimes the administration of this sacrament results in the healing of the sick person and even miraculous healing is not out of the real of possibility, but there is no guarantee that such healing will occur in any particular instance.

This sacrament is described in the New Testament by the Apostle James when he writes:

Is any one among you suffering? Let him pray. Is any cheerful? Let him sing praise. Is any among you sick? Let him call for the elders of the church, and let them pray over him, anointing him with oil in the name of the Lord; and the prayer of faith will save the sick man, and the Lord will raise him up; and if he has committed sins, he will be forgiven.   -James 5:13-15 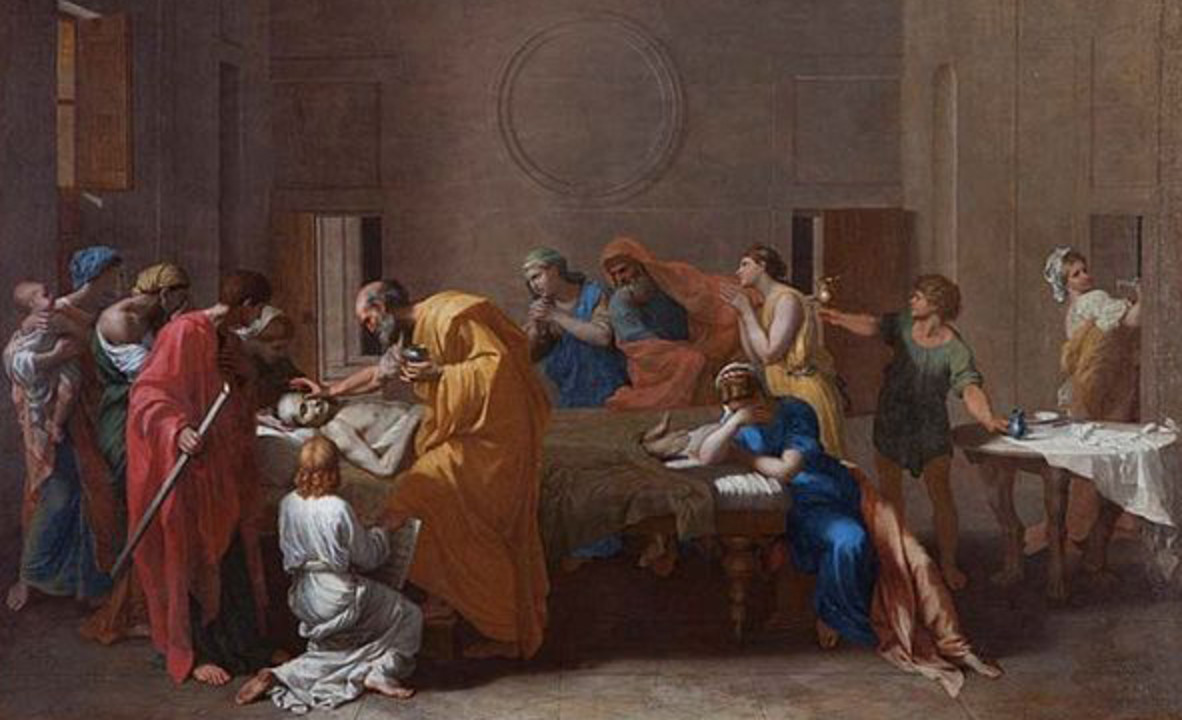 All of the seven sacraments are moments when power comes forth from Jesus so that we can encounter his healing and transforming grace.  Jesus worked many miracles and cured many who were ill, blind, even lame.  One particular healing has always been used to illustrate how the sacraments are encounters with Jesus through which we touch him and find help in our time of need, disease, or other distress.  While in the middle of traveling to heal the young daughter of Jairus... "a great crowd followed Jesus and thronged about him. And there was a woman who had had a flow of blood for twelve years, and who had suffered much under many physicians, and had spent all that she had, and was no better but rather grew worse. She had heard the reports about Jesus, and came up behind him in the crowd and touched his garment. For she said, 'If I touch even his garments, I shall be made well.' And immediately the hemorrhage ceased; and she felt in her body that she was healed of her disease.  And Jesus, perceiving in himself that power had gone forth from him, immediately turned about in the crowd, and said, 'Who touched my garments?' And his disciples said to him, 'You see the crowd pressing around you, and yet you say, 'Who touched me?' And he looked around to see who had done it. But the woman, knowing what had been done to her, came in fear and trembling and fell down before him, and told him the whole truth. And he said to her, 'Daughter, your faith has made you well; go in peace, and be healed of your disease.'" (Mark 5:24-34)

The elements of this sacrament include:

Liturgy of the Word or a short reading from Scripture

Anointing with the oil of the sick on the hands, and forehead with the words,

Through this holy anointing may the Lord in his love and mercy help you with the grace of the Holy Spirit. May the Lord who frees you from sin save you and raise you up."

When possible those near death are given viaticum (Holy Eucharist).  "Communion in the body and blood of Christ, received at this moment of 'passing over' to the Father, has a particular significance and importance. It is the seed of eternal life and the power of resurrection, according to the words of the Lord: 'He who eats my flesh and drinks my blood has eternal life, and I will raise him up at the last day.'" (Catechism of the Catholic Church, 1524, quoting John 6:54)

When administered at (or potentially near) the moment of death in addition to viaticum it may also include:

Fathers of the Church on Anointing of the Sick

“The priests of Judaism had power to cleanse the body from leprosy—or rather, not to cleanse it at all, but to declare a person as having been cleansed. . . . Our priests have received the power not of treating with the leprosy of the body, but with spiritual uncleanness; not of declaring cleansed, but of actually cleansing. . . . Priests accomplish this not only by teaching and admonishing, but also by the help of prayer. Not only at the time of our regeneration [in baptism], but even afterward, they have the authority to forgive sins: ‘Is there anyone among you sick? Let him call in the priests of the church, and let them pray over him, anointing him with oil in the name of the Lord. And the prayer of faith shall save the sick man, and the Lord shall raise him up, and if he has committed sins, he shall be forgiven’.” (On the Priesthood, A.D. 387)

“As often as some infirmity overtakes a man, let him who is ill receive the body and blood of Christ; let him humbly and in faith ask the presbyters for blessed oil, to anoint his body, so that what was written may be fulfilled in him: ‘Is anyone among you sick? Let him bring in the presbyters, and let them pray over him, anointing him with oil; and the prayer of faith will save the sick man, and the Lord will raise him up; and if he be in sins, they will be forgiven him. . . . See to it, brethren, that whoever is ill hasten to the church, both that he may receive health of body and will merit to obtain the forgiveness of his sins.” (Sermon, A.D. 542)

"Anointing of the Sick" by Catholic Answers

U.S. Bishop's page on Anointing of the Sick

What is Anointing of the Sick? 3 Minute Catechism

Anointing of the Sick: A Simple Explanation

Anointing of the Sick